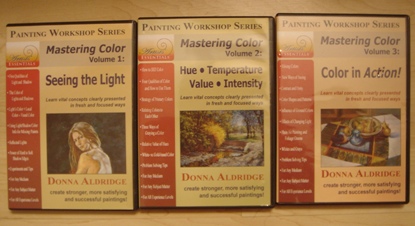 It’s finally finished — all three Arists’ Essentials DVDs are complete, as pictured above. I’ve shipped more than 35 sets away to our folks who have preordered, and the word coming back is overwhelmingly positive. Donna is taking them to workshops and meetings and seems to sell another set or two every time. 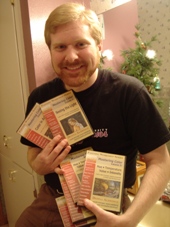 The last two weeks have been crazy — why did it have to fall over the holidays? — as I’ve been printing DVDs, burning them, slipping them in Donna’s fantastic covers and shipping them out. It was slow at first, but then again this is my first attempt at mass production. Eventually, we would like to send these off to a printer to do all the work for us, but to minimize risk and expense, we decided to do the first few batches ourselves. There are now about 45 of these sets in circulation and they’re already picking up a nice word-of-mouth buzz.

It’s been a year and two months from beginning to end, concept to delivery. I can’t say it’s been much of a struggle, although there have definitely been a few frustrating moments between the both of us. Donna has tweaked and fiddled with the covers like crazy, and I’ve been designing and redesigning the DVDs, adding menus items, changing the structure, adding titles, etc. That’s because we’ve been relentless in soliciting feedback from Donna’s close circle of artist friends who have helped and encouraged us to polish the final project. 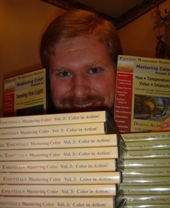 It usually takes a new project to motivate me to do something new. It’s been a year since we started this journey — from concept to completion — and I, for one, feel like I know all the ins and outs of the DVD format by now.  Maybe that’s because we’ve added so many goodies to this set that we had to pull out a few tricks to make everything work on the technical side. It’s great to finally see this job literally "pay off" for us.

Speaking of which, I have to say we’re reconsidering our pricing scheme. The content is so good, and it’s so feature rich, that we’re beginning to wonder if we’re selling ourselves short. So if you’re even considering owning a set for yourself, you may want to wander over to www.artistsessentials.com and order a set, because the price may be going up soon.

Now, I can finally move on to the next project waiting in the wings: Editing the documentary we shot last April. I’ll kick it off by posting some goodies next week. Things are starting to get interesting at red40, so bookmark this site and stay tuned!

Todd is a content creator, social media expert and cake decorator. He writes for a number of websites and has produced, directed and edited feature films, documentaries, TV commercials and corporate videos under his red40 entertainment banner. A lifelong pianist and karaoke enthusiast, he has performed internationally as an actor and magician, yet still struggles to get the hang of his bass guitar.